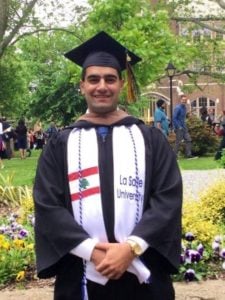 He landed a new job three months before he graduated from the Master of Business Administration with a Finance Specialization online program at La Salle University in December 2019.

“After I finished my undergraduate and paid off my student debt, I felt like I needed to pursue an advanced education to improve my academic career,” he said. “My mother and my family also pushed me to get an MBA.”

Mowad works as a data analyst at Bryn Mawr Communications in Wayne, Pennsylvania. He previously held a similar role at Chance Management Advisors for more than three years in Philadelphia.

“Some of the courses in the program helped me pivot to my current position,” he said. “I am applying my management, marketing and financial skills to this role.”

As Mowad came down the home stretch of the MBA with a Finance Specialization program, he benefited greatly from the flexibility of the online format while settling into a new job.

“It worked pretty well,” he said. “I was traveling with my company on a when-needed basis, so I didn’t know what my schedule would be like in the future.

“Because the program was all online, I was able to study throughout the United States in an easy manner, whether it was on the airplane, in hotel rooms or on Amtrak. Between the quality of the program, the faculty and the university, it was amazing.”

Mowad grew up in Reading, Pennsylvania, where he had an affinity for math and numbers. After high school, he enrolled in the Bachelor of Business Administration in business systems and analytics on-campus program at La Salle.

“While studying a lot of the analytics of business and corporations, I decided I needed to get a little bit more of a specialization than analytics,” he said. “Finance was one of my interests in my senior year. I thought it might be best to focus a little bit more on the financial perspective.”

During that first stint at La Salle University, Mowad promoted a book, “Dreams of Peace” via a social media marketing campaign and completed internships in information technology and operations at Pennside Partners and public awareness at Sunoco Logistics.

After graduating in 2016, he landed his first business analyst role in which he used different technology systems to analyze data. That experience led him to return to La Salle in the online program to increase his knowledge and acumen while maintaining a full-time job.

“Most of the financial courses that I took during the MBA program were my favorites because that was my specialization,” he said. “Being able to understand a lot of the financial perspective helped me learn a little bit more about the stock market and the investment industry.”

Mowad also had impeccable timing by enrolling in August 2017. By completing some of the coursework in the program, he became Bloomberg Market Concepts-certified.

“When I was studying for my MBA, La Salle introduced Bloomberg certification, which was an added benefit they were offering MBA students,” he said. “That was a very good perk for me.”

Rising Through the Ranks

With the uncertainty caused by the coronavirus, Mowad isn’t sure if he will walk the graduation stage when there is a commencement ceremony.

“It’s still an achievement that’s recognizable,” he said. “My friends and family were always motivating me to continue my studies. They were counting down for me to complete the MBA program.”

Mowad now has the knowledge, the piece of paper and the three important letters after his name that help him keep his future options open.

“I don’t have an ultimate career goal,” he said. “I’ll be happy with whatever comes onto my plate. I was able to bring the information from the classroom in the MBA program to real life.

“I also brought my real-life experience back to the classroom. It was a very good experience from that perspective and gave me good value from the program.”

Away from work, Mowad assists his local parish, Saint Sharbel Maronite Catholic Church, with catechism classes and serves as a member of the parish choir. He has also volunteered for In Defense of Christians and served on the parking research committee for the International Parking and Mobility Institute.

He believes he has found greater success through his experience in the MBA with a Finance Specialization online program.

“I would say to those who are working professionals and taking the program, implement a lot of real-world experience into the classroom,” Mowad said. “The more you put in, the more you take out. It will help you grow in your career.”

Learn more about the La Salle MBA with a Finance Specialization online program.

Chris McGovern Drills Deeper Into Higher Education in Online MBA Program
While growing up on land bubbling with black gold, Chris McGovern accrued firsthand knowledge of finance and tapped into his future career well. Seeing the…
Read more
Get the Career You Want With an MBA in Finance
A finance-focused MBA is a key step for professionals seeking upper-management positions such as investment banking analyst and chief financial . This graduate degree teaches…
Read more
Hank Sharkey Stays Close to Home in La Salle MBA Program
Location, location, location. Proximity was the driving force behind Philadelphia area native Hank Sharkey’s decision to enroll in La Salle University’s Master of Business Administration…
Read more
Jim Thompson Changes Career Field While Enrolled in Online MBA Program
Jim Thompson was a seasoned baseball professional scouting for the New York Mets when he enrolled in the online Master of Business Administration (MBA) program…
Read more
Rob Irvine Earns Third Master's Degree in Online MBA in Finance Program
Hello, hat trick. La Salle University men’s soccer head coach Rob Irvine graduated from the Master of Business Administration, Finance Specialization online program and netted…
Read more
Rita Reed Explores More Effective Leadership With MBA in Finance
From the time Rita Reed landed her first job as a teenager, she has always gravitated toward leadership roles. Now, her goal is to become…
Read more
What to Expect With a Finance MBA
Professionals with a finance MBA are equipped with the skills and knowledge for a wide range of roles in the financial industry and beyond. The…
Read more
Why Choose an Online MBA With a Finance Specialization?
Considering an MBA? Do potential earnings factor into the decision? If so, a 2017 Graduate Management Admission Council (GMAC) survey has some good news: The…
Read more
Have a question or concern about this article? Please contact us.